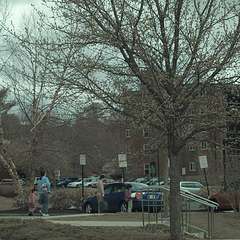 It's been a hectic week in eastern Massachusetts, with a police chase happening going right through what used to be part of my daily commute chasing terrorists who lived a block away from where my wife used to work, and ending in a gun fight and manhunt about a mile from the apartment I rented before moving to Cambridge.

The reactions and actions of the politicians and residents has been reassuring—there's been a definite sense that we're all in this together and apparent coöperation. There has been several stories speaking about how the local (city and state) police played a large role in these events which was certain important.

When I arrived at work early Friday, I was unaware of what had happened the previous night and what was still going on in the surrounding area. While my route to work no longer goes through Watertown, the police had established checkpoints at major roads and intersections in the cities adjoining Watertown, which included the town containing my office.

Discovering that the town—and my office by extension—was closed, I left for home a couple hours later, admiring the minimal traffic along the way. The street on which my office sits had about a half-dozen patrol cars in various locations over the course of a mile, itself located fo
ur miles from the cordoned-off area of the morning's firefight and the ensuing dragnet.

With all of that going on, and a metropolitan area of millions of people closed down—possibly costing multiple hundreds of dollars in GDP for the city according to Bloomberg's back-of-the-envelope estimate—the scene just another mile away belied the tension felt in the city. The sun poked in-and-out from behind the clouds, children played basketball and adults played golf.