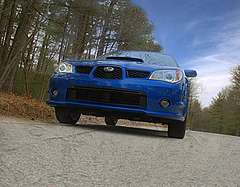 The first was that it needed all-wheel drive. My Civic lasted me a long time. It got me home-and-back in college, it got me around town when I was working on my post-graduate degree, it even got me and my skis to the mountains when the weather was willing.

But it wasn't that great when the weather hadn't been willing. Now that I no longer lived within walking distance of my daily commute's destination, it was vital that I could rely on my car to get out of my driveway after a harsh snow fall--doing this in my civic had become a frustrating experience as it was hard to keep either momentum or front-wheel traction enough to escape to the byways.

This, and the general weather around skiing locations, led to the primary rule: it needed to feature all-wheel drive with a central differential.

Perhaps it was that I was scarred by one too many attempts riding in the family Ford Taurus to get back home up and having it fail to climb the hills along the way, but I there were also concerns about the engine's power output. The stock WRX generated in the low-200hp, sufficiently above the
100-140hp that my familial Taurus would have generated, and above the 125hp my erstwhile Civic generated.

Nice-to-haves included an in-dash navigation unit, a dash receiver that played compressed digital audio and supported multiple discs, and an audio jack with which to connect my portable media player. The 2007 WRX had all but the first.

The WRX was the cheapest vehicle that met these criteria. The closest competitors were the Audi Quattro, the BMW 300 series, the Mitsubishi Lancer Evolution, and a selection from Porsche.
Of these, the Audi and BMW were both interesting cars, but either significantly costlier or significantly less car. I found the WRX's focus on being a functional car more impressive than the Audi or BMW's focus on being a status symbol. The Porsches were outside of my budget, but clearly the better car.
In hindsight, the 2008 Mitsubishi Lancer Evolution would have been a hands-down victor had it been available, and had I focused more on the line beforehand.