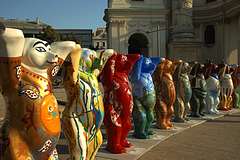 The /United Buddy Bears/ were a German exhibit originating in Berlin but later travelling internationally.

Love me, hate me, kill me, anything. Just let me know it.